The Three of Cups

The duplex nature of the Two of Cups develops here into a triplicity. We see women celebrate in a prosperous garden. I will not go into detail on the symbolism of the number three, but the first figures that come to mind are the three graces of Greek mythology.

Here, the three women wear white, red and gold. Red is central in the Three of Wands, as well, where we see a man facing a vast, golden landscape (the same colour as the ground on the Three of Cups). A red heart is in focus in the Three of Swords. The exception seems to be the Three of Pentacles, where red is not placed in the visual centre, though the red motive on the robe of the man on the right seems to echo the rose in the middle.

In the Three of Cups, the blue of the sky is reflected in the shoes of the personage dressed in gold. She also holds blue grapes in her hand.

There is some resemblance with the Nine of Pentacles, where we see a woman alluding to the sky (a falcon on her hand) and among grapes. But on the Three of Cups, it seems as if her goblet was a funnel, and the blue of the shoes and the grapes were heavenly water flowing through her body.

Notice the striking structural similarity with the Hierophant.

On both, there is a central red figure in the company of two others. But the dynamics of these two cards is contrary: on the fifth major arcana, the figures are male, and they observe a rigid hierarchy (as opposed to the Three of Cups which is a meeting of equals), etc.

The two golden details at the feet of the pope (worn by the two monks) recall the golden shoes of the woman in the red dress on the Three of Cups. The Hierophant has no goblets, but he is wearing a three-tiered tiara and a papal (triple) cross that hint at the three cups held in the air.

Interestingly, one of the monks is wearing the dress of the Empress, and the other has the cape of the Queen of Cups.

The question arises whether we see two very different expressions of spirituality here. The Pope is chosen to represent celestial power on earth, and he is seated in a church, probably performing a strict ritual. The women on the Three of Cups are together in an intimate, spontaneous and unceremonious way, where spirit flows freely and naturally.

As opposed to the Hierophant, the Three of Cups welcomes all to their holy communion without conditions: there is no dogma to accept, and no rituals to follow. 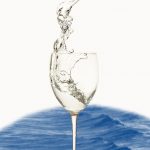 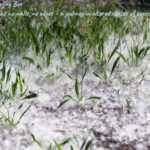 I realized that what surrounded us was not snow but seeds from a cottonwood tree. There was hardly any wind, we were enveloped in small, luminous feathers, playing in the colours of the setting sun. The world was in slow motion, as if we were all floating. I looked around, observing all the details, the lights, the colours, and I noticed that there was a river close by, and a boat on the bank. There was an old couple sitting by the boat…Read now

The Two of Cups 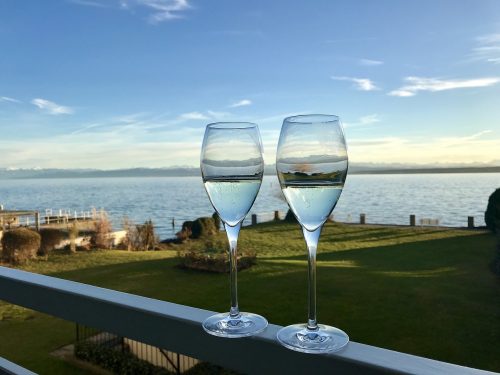 It's interesting to have a look at how the symbols of the Ace develop in the Two of Cups. The single chalice multiplies into two goblets. The disembodied hand from the clouds changes into those of a man and a woman. The dove turns into a winged lion. The waffle with the cross becomes the caduceus. The lake with the lotuses is now a meadow with a family home in the distance. 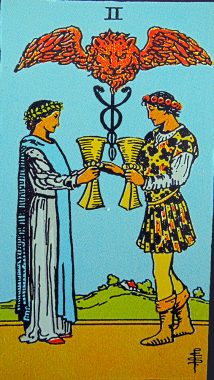 The special, symbolic nature of the number two is preserved in many languages that distinguish between one, two and many.

In English, for example, there's "both" vs. "all" and "between" vs. "among". In mythology, we find various types of pairs: divine couples, twins, parent and child, the hero and their adversary, etc. Duality is everywhere within and around us: we have a pair of eyes, ears, hands, kidneys, and so on. When we first notice anything, it is always in contrast to what we are already aware of. At a young age, we discover that there is light and darkness, sweet and salty, there are boys and girls, adults and children, humans and animals, animals and plants, and so on. 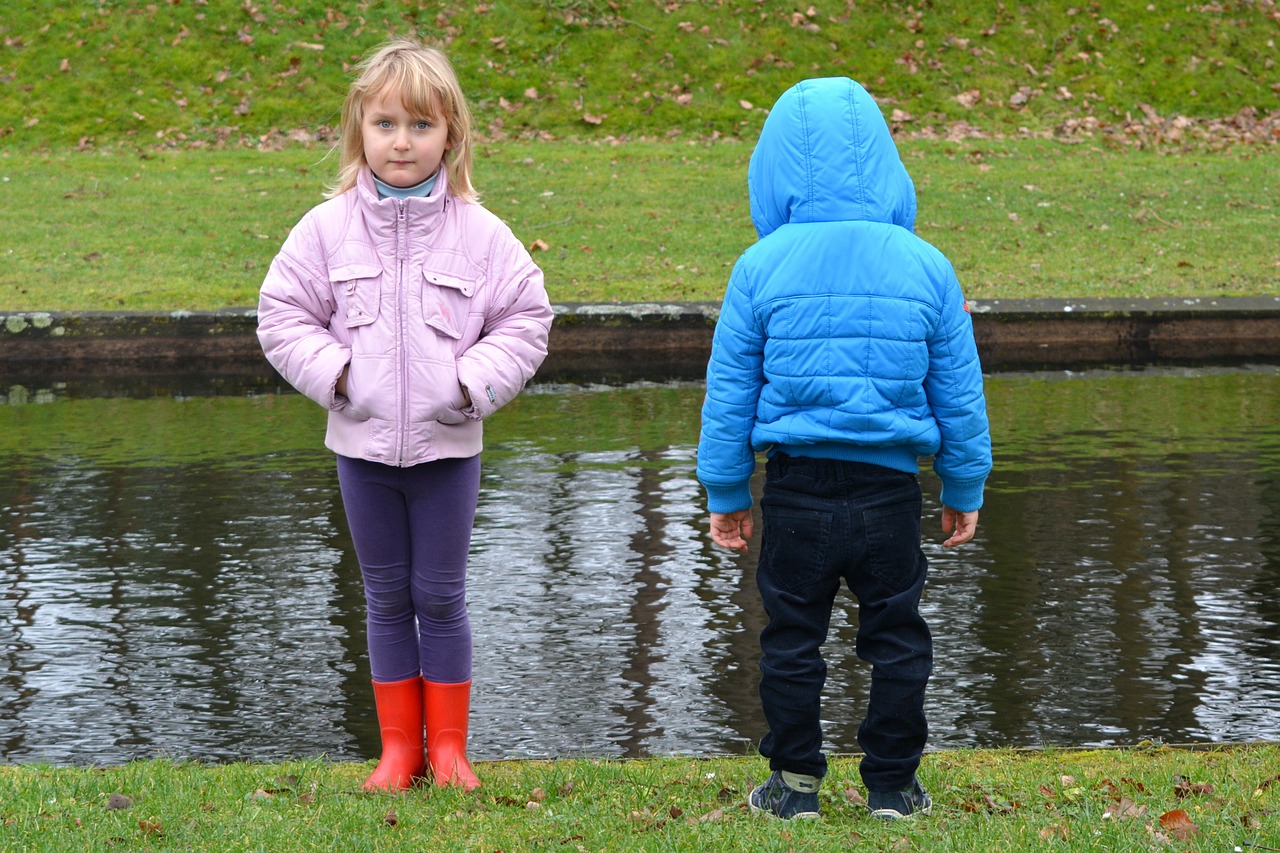 The problem with duality is that we define the other as a negation. We can only tell what one is not: a child is not an adult, nor an animal, a plant or an object. Duality can answer the question "what is this?" only by telling what it is not. If we do want to know who and what the other is, and who and what we are, we need to go further.

Out of duality, a new, third, alternative has to be born.

If we follow the astrological order of the elements (Aries - fire, Taurus - earth, Gemini - air, Cancer - water), then the Two of Cups is the last of the "twos". As such, it depicts the culmination of duality: the union of opposites. The house in the background may hint at the couple founding a family, here is the promise of a child.

There is also a subtle exchange of attributes. In Greek mythology, we find the laurel in representations of Apollo, the god of the Sun (the lion in the card), healing (caduceus), and prophecy (cups). Now it is on the head of the woman. The flower corn on the man's head is that of Apollo's twin sister, Artemis.

This card is often compared to the sixth major arcana, The Lovers, where we see a naked man and woman in a setting that recalls the garden of Eden.

On the Two of Cups, the couple is dressed, which suggests that they are participating in everyday reality.

Together with its positive message, the card also brings a challenge. This reunion of opposites has to be shared with others. This work is not only inner or psychological, it has to incarnate in the physical and social world.

The Woman who Eats the Sun 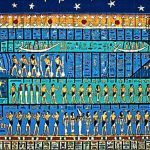 In ancient Egypt, the goddess Nut was the mother of gods. She was the night sky; and the Milky Way in particular. Alternatively, her body can be interpreted as the path of the stars, and she might even have been one specific constellation. Naked, in her full feminine beauty, she was bending over the Earth…Read now

The Ace of Cups 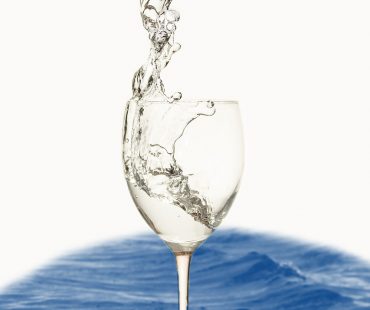 The cups suit takes us to the realm of emotions, intuition and dreams. The Aces are about new beginnings and what the coming cycle springs from.

If we match the four aces to the four cardinal signs in astrology, the ace of cups corresponds to Cancer, the sign of the summer solstice.

Among the cups, there are nine cards where the goblet is held in hand. Seven has it grabbed purposefully, to be drunk from or used in some practical way.

The chalice also appears on two major arcana: the Temperance and the Magician. On the Temperance, like on the seven cards of the cup suit, the goblets are grabbed firmly and are used for a certain purpose. The Magician has it on his table, as he does with all the suits (the coin, the sword and the rod).

Now look at how Mary is holding the infant in orthodox iconography and compare it with the position of the hand on the ace of cups. 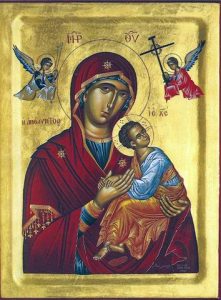 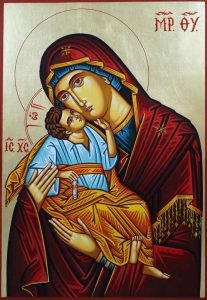 Here the chalice is held in a different way than on the rest of the cards (except one). It is standing on the palm, with the thumb raised and crossed on the foot. 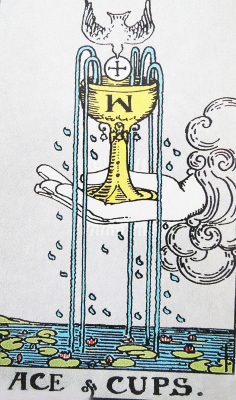 The water below is the water of life, where everything grows and flourishes: an obvious connection with the Holy Grail. According to Catholic tradition, the Virgin Mary ascended to heaven by the grace of (the male) God. Here we see the M of the Marian cross inverted, the cross equal-armed and the dove diving.

The Sacred Feminine is returning from the sky to her own domain, out of her own will.

And there is only one other card where the chalice is held in a similar way, standing on the palm: the Queen of Cups. Hers is a very special vessel that does not appear anywhere else in the deck… 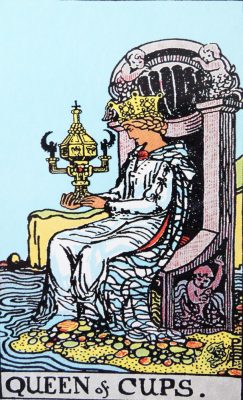 When the Ace of cups appears in a reading, think of the womb, an embryo growing, or seeds waiting for spring in the dark soil. Something has started, it is alive within you, you have to let it grow and manifest when it is ready to.

Tarot: the Two of Cups

It’s interesting to have a look at how the symbols of the Ace develop in the Two of Cups. The single chalice multiplies into two goblets. The disembodied hand from the clouds changes into those of a man and a woman. The dove turns into a winged lion. The waffle with the cross becomes the caduceus. The lake with the lotuses is now a meadow with a family home in the distance. Read now

The Natal Chart from an Animistic Perspective 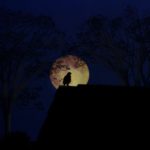 Many of us start learning astrology by attaching keywords to planets. And at one point, the list will become overcrowded and full of overlaps. Read now